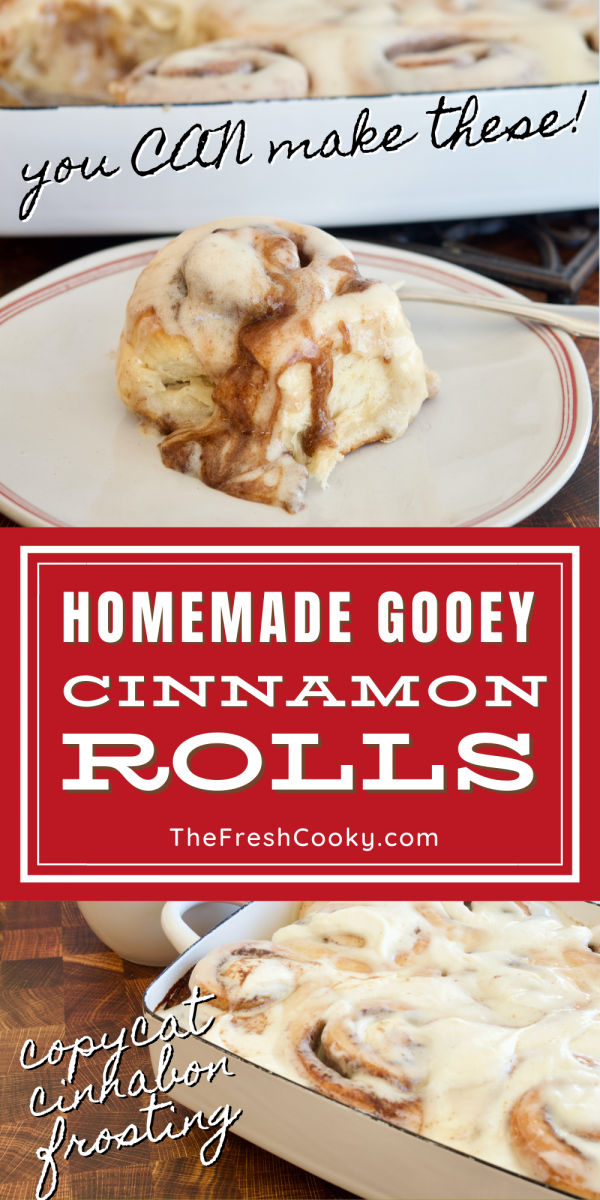 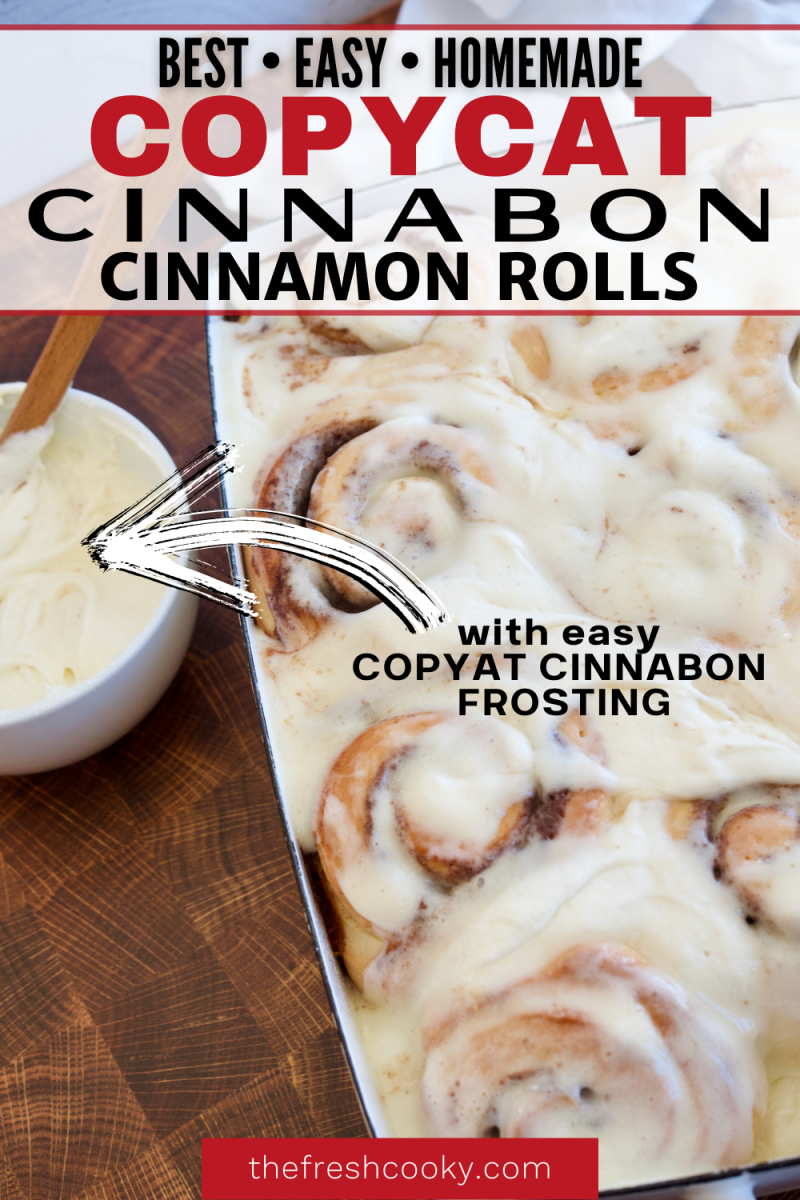 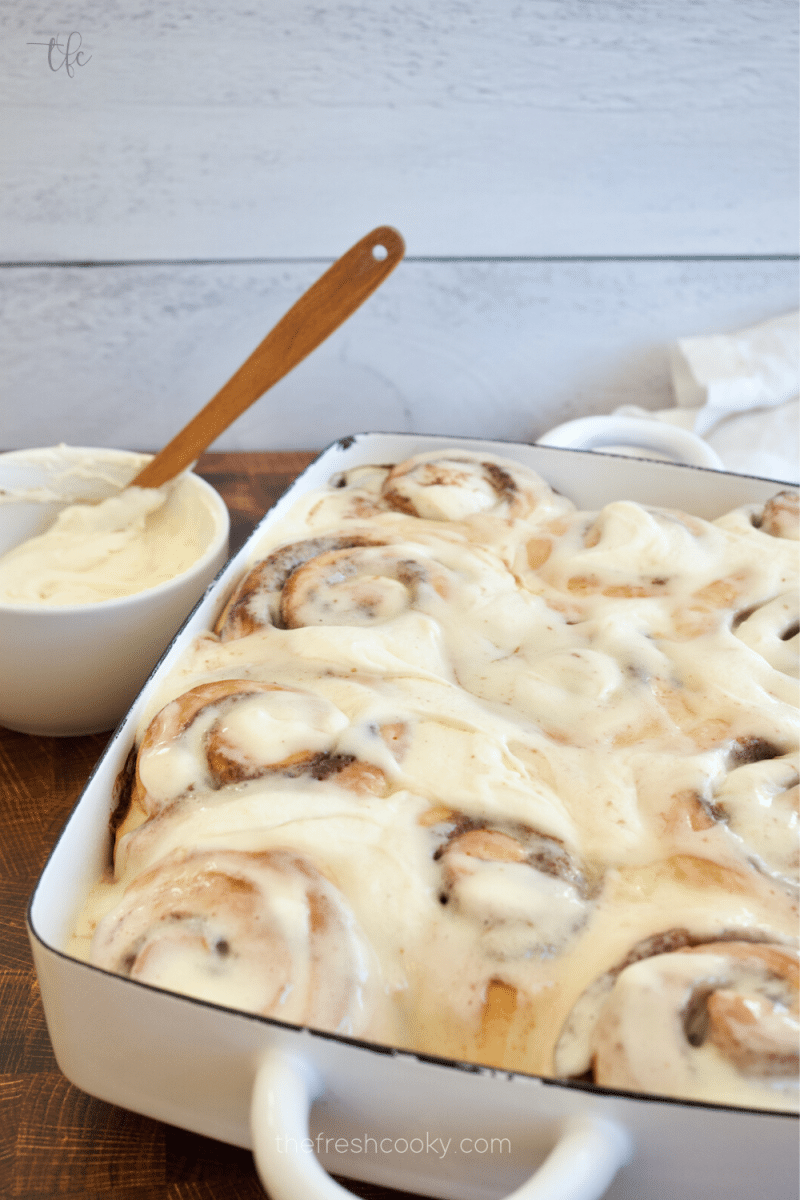 These gooey cinnamon rolls are so very simple, before you know it (with a little patience), you’ll have a sweet, soft bread with buttery, cinnamon, with ooey-gooey centers topped with an amazing, fluffy Cinnabon frosting; a clone of a Cinnabon!

These are my signature rolls, people have been known to request them when we are coming for a breakfast or brunch. Soft, fluffy, stuffed with buttery cinnamon goodness; homemade cinnamon buns with a rich, creamy and easy cream cheese frosting.

If you love breakfast sweets as much as my readers (and my family) then you have to try these recipes; Pumpkin Honeybun Cake, Blueberry Crumble Cake and this simple Fall Breakfast Charcuterie Board; a grazers dream! And don’t forget this equally delicious Chocolate Stuffed Monkey Bread!

“I can not say enough about this recipe!! I was skeptical. Nothing on Pinterest seems to ever turn out exactly like the pictures. These are absolutely incredible! Turned out EXACTLY like the pictures and recipe showed! My cinnamon rolls always have turned out dense and dry. I genuinely wasn’t hopeful. It was for Christmas morning and I had a back up plan in mind but these were pure perfection! These will now be a Christmas tradition in our family forever. After I cut them for the second rise i put them in the fridge to rise overnight. Set them out while everyone was opening presents. Then baked them while the table was being set for breakfast, coffee was being brewed and frosting was being whipped up. They are out of this world!”

Do you like funny stories? Well I’ve got a whopper for you, this one almost cost me my husband!

Brad and I had been dating about a year and a half and I was hoping and praying that he would soon ask me to marry him. One weekend, Easter weekend as a matter of fact, we had planned on going skiing for closing day at Vail.

I was all good with that, was all ready to ski when he arrived, except he threw me a curve ball when he asked if I would pack an overnight bag, just in case we got snowed in. Yeah right, in April? Late April? “Wait”, I say with a rather panicked tone to my voice, “tomorrow is Easter, I have to be back tonight to start my cinnamon buns, I always bake cinnamon rolls for my family!”

He could see the look of terror on my face that he would even ask me this, I stammered and stumbled through the fact that we had to be back home that night, I couldn’t let my family down and not bring my ooey-gooey cinnamon rolls, Easter depended on it! I actually argued with him for awhile, seriously, what was wrong with me, I must not like last minute changes or something!

He naturally suggested we could just buy cinnamon buns the next morning if we did get stuck in the mountains. WHAT!? ARE YOU KIDDING ME, I don’t BUY cinnamon rolls…I could tell he must love me, A LOT! He took my “freaking out” and urged me to get my bag and we’d figure it out as we go.

Keep Reading for Recipe or use the “Jump to” recipe button at the top of the post.

What I didn’t realize was that my dear, sweet, gentle, kind-hearted, loving and wonderful soon-to-be-husband had called my Dad (in Florida) to ask his permission to marry his 35 year old daughter. AND he had driven all the way to Boulder (an hour) to ask my Mom the same thing. My whole family knew I was getting engaged and I was worried about not bringing cinnamon rolls!! Sheesh!

He had planned to propose to me atop Vail mountain. Enter a freak spring snow storm that closed the mountain due to thunder and lightning. He spent the day trying to secretly rearrange all his plans to accommodate this twist! Our God has a great sense of humor!

That evening, after a lovely dinner, we traipsed through Lionshead. While tromping through heavy wet snow (over a foot) I started hearing the strains of a song being played. Specifically Van Morrison’s “Have I Told You Lately That I Love You.”  I thought that was so sweet, but things still didn’t click.

Brad said, how much he loved that song, as do I, it was kind of our song. He then walked me out to the bridge and with half dollar sized snowflakes gently falling, got down on one knee in that heavy, wet snow and said “I want to be your life-long companion — to love and serve the Lord alongside you — and to walk through this world with you…will you marry me?” By this time I had completely forgotten about my must-make cinnamon buns (finally!) and I said “YES!”

We were indeed snowed in as they had closed Vail pass and was I grateful for that change of clothes he insisted I bring. We showed up at my parents house with store bought cinnamon rolls in hand!!

For several years I continued to make my grandmother’s overnight cinnamon rolls (it has become the family joke), but now I’ve learned that you can make them the morning of, no overnight necessary!

Whatever you do, don’t let something as trivial as a favorite recipe or tradition alter your relationship with people, in the end it’s about the people, not the food!

Thanks for hanging with me through that story, I love engagement stories, each one is unique, I’d love to hear yours! But let’s get going on these wonderful ooey-gooey cinnamon rolls.

How to make Ooey-Gooey Cinnamon Rolls

TFC PRO TIP | Take out 2 additional sticks of butter and your cream cheese to soften while you are making your dough.

BAKING HACK | Forgot to take your eggs out of the fridge the night before, like I always do? No worries, run warm, not hot water into a bowl and place eggs in bowl to bring to room temp, takes about 5-7 minutes.

Grease a bowl with a teaspoon of oil, using a paper towel spread oil around bowl, plop dough in and turn over covering dough with oil. Cover with plastic wrap and place in a warm spot for about 15 minutes to rest.

TFC BAKERS TIP | Warm rising spot? Preheat your oven on its lowest setting, then turn off oven. Place the dough in the now warm, but turned off oven. If your oven has a “proofing” setting, place on that setting and let rise for 15 minutes.

Meanwhile in a small bowl, combine the brown sugar and cinnamon with a fork and set aside.

Once the dough has rested for about 15 minutes, place on a floured surface and roll out into roughly an 18 x 21 inch rectangle.

Next spread the ½ cup softened butter, evenly onto the dough, I like using an offset spatula.

Spread cinnamon sugar mixture evenly over the top of the butter within about ½ inch of the edges.

UPDATE | I still make these as shown above, but sometimes, I melt the butter, combine with the cinnamon filling mixture and evenly spread the cinnamon and brown sugar mixture on the dough.

Starting with the long edge, roll tightly into a log.

Using a little water, rub along the edge of the dough and pinch edges together to get a good seal.

Place in greased (buttered or non-stick spray) 9×13 pan or line with parchment paper, with space between each roll.

Cover with a damp tea towel or plastic wrap and return to that warm place to rise until nearly doubled, about 45 minutes.

Preheat oven to 400° (375 if using a dark or glass pan), remove rolls before preheating. They have now doubled in size!

Bake about 12-15 minutes, don’t over-bake, if anything under-bake slightly until risen and slightly golden.

How to make Cinnabon Frosting

In a large mixing bowl whip together butter, cream cheese until smooth, add powdered sugar, vanilla and pinch of sea salt; beating until smooth and fluffy, if needed add a teaspoon or so of milk or cream.

Smother over the tops of warm rolls, serve immediately. Or spread on rolls individually.

Can I start Cinnamon Rolls the night before?

YOU BET! Make the recipe up to the sliced roll stage, cover tightly with plastic wrap and put in refrigerator overnight. They will rise slowly, take out in the morning bringing to room temp and making sure they are doubled, preheat your oven and bake.

What type of flour is best for homemade Cinnamon buns?

Since you are making a sweet bread, bread flour is best! Available at most grocery stores, bread flour will ensure your ooey-gooey cinnamon rolls are soft, fluffy with the perfect rise. These can be made with purpose flour, but take the time to grab some bread flour and if you have leftover, make this amazing Russian Black Bread.

Yes, they will continue to rise slowly in the refrigerator. Be sure to cover tightly with plastic wrap and bring to room temperature (at least 30-60 minutes) before baking.

Also great for Easter are these super easy, light and fluffy yeast rolls! Give them a whirl!

Want to make a truly decadent treat? Add this simple and amazing Brown Sugar Bacon to your menu.

Preheat oven to 400°. Line a rimmed sheet pan with foil. Set an oven safe cooling rack inside the prepared pan and set aside.

In a shallow dish, place about ¼ cup brown sugar. Dredge thick bacon slices in the brown sugar and arrange the bacon on the rack. Bake in the preheated oven until crisp, about 20 minutes. Transfer to a serving plate and serve immediately.

You may also throw in a teaspoon of chili powder or a sprinkle of cayenne into the brown sugar, if you like a little heat.

I hope you loved this incredible recipe for Gooey Cinnamon Rolls, it will become your favorite too! 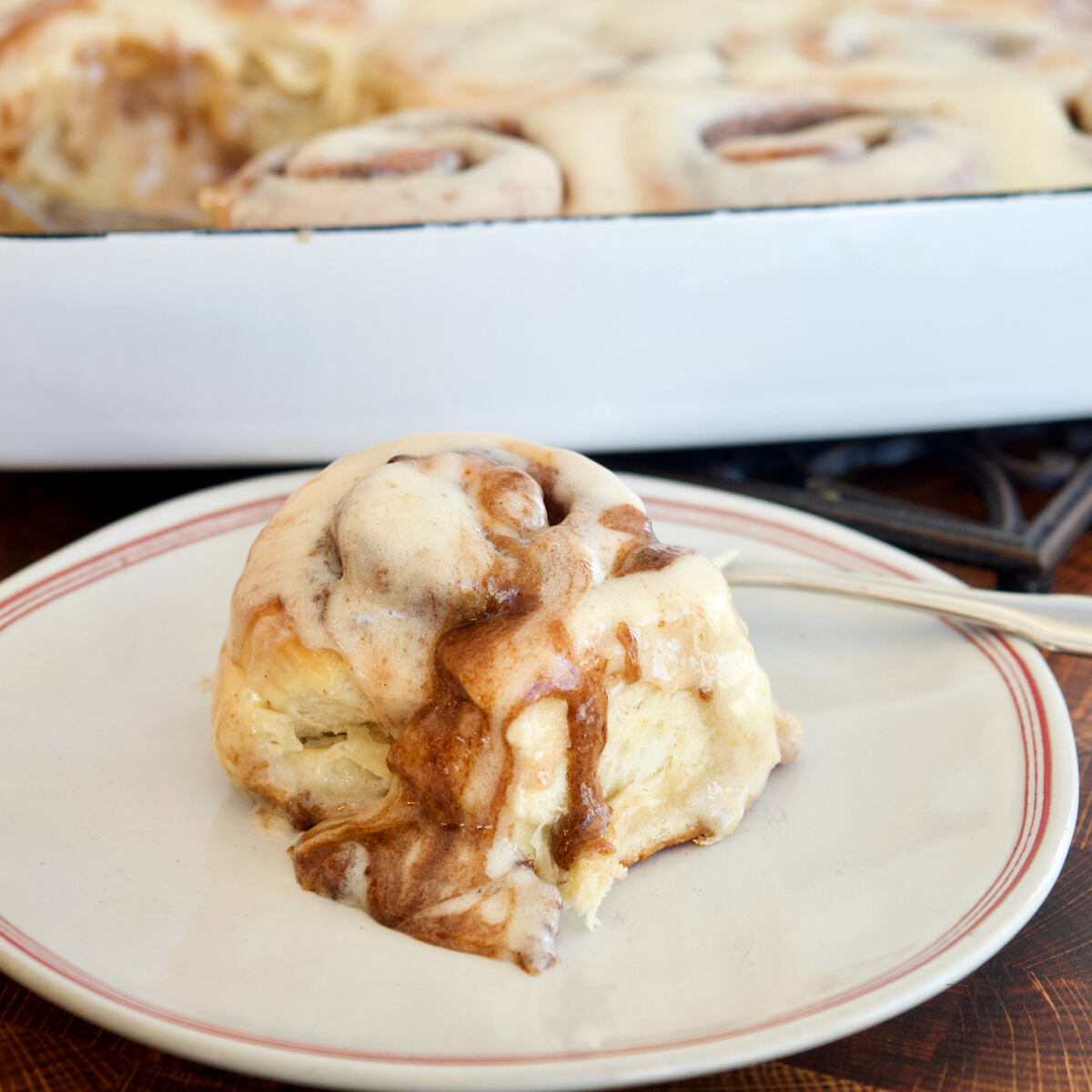 Make recipe up to second rise after slicing rolls. Place a piece of plastic wrap over pan tightly, place in fridge overnight until morning. When ready to bake. Remove from fridge for 30 minutes allowing to come to room temp and doubling in size. Bake as directed.

Parchment Paper Baking Sheets by Baker’s Signature | 12×16
Did you make this recipe?Let us know how it was!